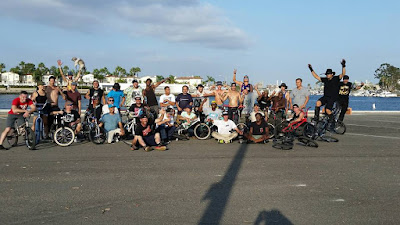 I know I always say it, It's been a while...yada yada yada. Anyway I saw a few months back there was going to be a jam in LA. It is very rare so I made plans to head down. Pistolero Jam happens to be at a great time of the season. The day is still kinda long, but short if you know what I mean, in just a few weeks we will be in darkness around 4ish.

I started my journey on Thursday, I took the back roads to check out the vineyards in hopes of taking a few pics with, yes I know, I'm a hipster my SLR film camera. By the time I chilled out and snapped a few shots, OSG hit me up seeing if I had left the bay. So I swooped down to pick up his trifling ass.
Once there we loaded up, and he took me to his man cave so we could get our minds right for the journey. He has a few gems, maybe I can work a barter with him.
Hmm maybe about a few hours into the ride, we are approching Fresno, I do like that Planet Asia is native there but it is Central Valley, anyway OSG gets a ring from his homie Mutt. Mutt is saying I-5 South is closed because of the mudslide, we checked the world wide web and he was right??!? Fuck so we headed down some detour down a road in the middle of know where to hit 101 South, which was packed. Made it to a rest stop outside of Santa Barbra and took a nap before heading in to LA. We arrive at B. Carter to meet Andrew W for a tour into DTLA. It was very grey for LA, I guess El'nino is impacting their climate more. Later that day we had lunch and headed down to Burbank to Bobby's new spot. Even though it was only 7 miles away, part of the main highway was shut down because of a jumper. So it took an hour and half to reach the spot. I watch OSG cringe at the site of cars and crazy LA drivers.
After the sesh we made it down to the event organizer home, so we could be closer to the mesh and get a good parking spot. The next day after coffee and some food we headed down to Newport Beach. We arrived to see a car show on the courts, even a sign that said "no bikes". Lalo made a quick adjustment to the FB event wall and change the location to the LBC Marina.

Like I said earlier, it's rare SoCal has a jam lately, Lalo and Richard delivered. The "partluck" was something I never heard of, all I know is riders who had broken parts or indeed got hooked up! The riding & weather was unreal! Flatland trickery from all different styles, so many different style for miles. Thong was the man BBQ, while various riders donated drinks and snacks. At the end of the day we took a group shot, and many continue to ride until the sun was gone.

It really was an awesome time despite the crazy detour, I can't wait for next year Pistolero Jam. Hope to see you there. Thanks again Lalo for giving us a place to lay our heads, and thanks to all the riders who let me catch them in the act on film.
Photo's by
Mindy Witthoft