Last year around February I heard that Nas and Damian Marley will be working together on a new album. I am a fan of both artist, so when May 18th hit, I had the album that day.  The fusion of Hip-Hop and Reggae in Distant Relatives makes for a unique album. Consider us lucky, the album was only going to be an EP and only distributed only in Africa.

At the end of 2010 the dynamic duo made a trip back to Trenchtown to film the next video off the album, "Land of Promise". While there B+ filmed a 3 part mini-series of there trip to Jamaica. It looks like my next trip is planed. Go out and get this album, it's history in the making. Also check them out preforming this year at Coachella. Check out this related link. A look into the past. Reggae Rebels
Peace

Once again I like to thank everyone who came out to the One Love Jam. The journey started early, we had to pick up Dave DeBunono in LA. Good thing too, the rain was coming. Good bye Norcal, hello Socal.  We hit LA with no traffic. The weather was great but forecast was saying that the highs on Saturday will be up to 78 degrees. Thats something you got to say for winter in LA county. We had a few minutes to spare so we got a bite to eat at the Deny's. After lunch we picked up Dave at LAX. Next we are drove to Bo Wade's day spot in Redondo Beach.

Bo has a pretty sick day spot in the park down the street from his house. After the session we took advantage of our surroundings. This was also the first time we ran into a problem with Babylon, I guess someone was bored. So we got our wrist slapped and was told  "Don't be a victim.". It was time to grab a bite to eat at Bo's favorite burrito joint. Afterwards we headed back to lab, changed socks, and headed to his night time spot. Bo is all about riding, watch out for him this year. A few hours in and 2 more riders showed up. Brett Crothwer and Bill Freeman. Brett was enjoying the spot. I meet this dude 10 years ago. Good to see he's still shredding.

The next morning before we could hit Studio City for a little pre-jam action, a quick detour to see Eric@Tip Plus. Eric has been helping us out from the beginning. Good looking Eric. We lit up some Cheese and headed to Long Beach. We arrived on the spot to see Eric had went to lunch. We sat outside and waited till he got back. Eric greeted us with smile when he got back from lunch. He had everything ready to go. Thanks again Eric. You helped out big kid.

After Tip Plus,  Studio City was next. There was a pre-jam going down. This was a great day, sun was shinning, not a cloud in the sky. Once there you could see riders were already throwing down. Johnthan the Studio City local shows up on his street bike, but later trades it for his flat. The Duke was also in town for the event. He escaped the harsh Georgia snow, for some sunny, warm weather. Norcal was in full force. All of the Bay came down. Vegas Mike drove North,South Bay Area down to the event. Jason got most of the East Bay. We caught up with Vegas Mike and the Bay later that day. The session went on till after dark. Day was busting out. Dirty Hearn and Dylan were also showing skills in the lot. Of course after the session we hit up some Thai food. The other restaurant was closed, but this Thai place was not that bad. A little cheaper too. After dinner we were off to LA Richards for rest. Tomorrow is going to be a big day.

The next day started early. Richard was up before us, he had to run some errands before the jam. We got some breakfast across the street, rolled up, and off to Studio City. Once there  I saw that Nocal presents was heavy at this event.  Day was all over the parking lot as well as Dylan busting out. Sparker was laying down his signature move "the drunk driver"(busdriver to half bar spin to slider), Dirty was riding so hard and fast. It was great to see Sean McKinney from Revenge Industries make it out. I even saw the guy ride for a bit.  The Studio City lot is big enough for any type of style rider. Although Dirty, Day and Dylan looked like they could use a little more. As the day rolled on, it was time for the group picture. Afterwards there was a drawing for 5 prize bags. Each bag was filled with product and a Primo Comet. As in the Athens Final Exam, we threw a foot down contest for a pair of cranks. Bill had the eye of the tiger, and walked away with a new pair of Primo cranks. Afterward some people rode, some people chilled. There was a lot of love in the air, and kush. It was a great time.


Thanks everyone again for coming out to the event. Also a big thanks to Eric@Tip Plus. Also thanks to Deco Bmx, Profile, Primo, Neon Media, Diversion TV, Day Smith Beanies, and Innertwine Clothing. See you guys next year. 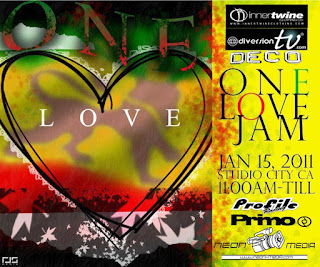 Thats right, 9 days left for the first jam of the year. The extended forecast looks good so far. Threw this video together to get everyone hype for the jam. I can't wait myself. Looks like we are going to see a lot of faces from all over North America. Also we got a new sponsor, Revenge Industries. Look forward to seeing you out there. Peace.