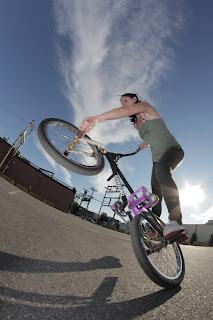 Paula is awesome. I ran into her again a couple weekends ago at the Van City Flat Jam, and shot some photos during our hung-over Sunday riding session. Here are the words that go with them...

SK: Brakes or brakeless?
PC: Brakeless. I have a front brake on my bike, but I don't do a single trick that involves braking. I like riding to my spot, and there's just too many steep hills around Vancouver and sketchy drivers to not have a brake. I was going through my shoes at an alarming rate when I first arrived in town, so the brake went on and my wallet is a bit fatter. But when it comes to flatland I prefer the style, smoothness and discipline that comes with riding brakeless.

SK: Front wheel or backwheel?
PC: Both are important. Right now I'm really into combos that go from front wheel to back wheel tricks, or vice versa.

SK: How did you get into flatland?
PC: I've always been active. I played hockey for 10 years growing up (in Canada), but eventually I out grew the league and needed to find something else to move on to. I also tried skateboarding when I was 15, but it never really felt right. Several years later my boyfriend at that time rode flatland and I was really attracted to it, it was definitely something I could get into. There was also something nostalgic about it. When I was much younger I used to go on epic bike rides with my brothers, on a single geared 18 inch BMX, it was difficult to keep up. When I was 8 I somehow came into possession of some type of road bike with faulty gears. I got tossed over the handle bars going downhill and landed on my forehead and somersaulted onto my back. I gashed my head open pretty good and there was blood everywhere. I wound up in the ER with a head full of sutures. Sometimes I laugh about how my passion for bikes came to be. Maybe it was the concussion? Anyways, after I was introduced to flatland in my 20's, through my ex boyfriend, I thought about taking it up for a few years before I finally built up a bike to ride. I've never looked back.

SK: More girls riding flat in the future? You think yes or no?
PC: I'm an optimist, so I have to say Yes, more girls riding flatland in the future. I never knew what it was until I was 20, so exposing flatland to the general public will be the catalyst that drives more girls into riding flatland. I went up to Whistler recently for a day trip and checked out the mountain biking scene there. At the bottom of Blackcombe a few small groups of riders were resting/waiting for other riders. At least a quarter of them were women. So you can cross "dangerous" as a reason why girls aren't riding flat. It's a matter of awareness. 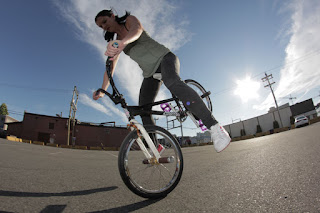 SK: Girl categories at contests? good idea or bad?
PC: It depends where the contest is. If you have less than 5 girls in close competition with each other I wouldn't recommend a girls class. Even if you have 15 riders with 2 girls, people are going to automatically compare the girls to each other. When it comes to competition, it's not a matter of gender; it's a matter of practice. Coincidently, girls are more motivated to ride when other girls are involved. I enjoy watching a video of a girl riding more than a guy, even if the guy has superior skills, it's just human nature. So if you have the makings for a girls' class then go ahead, cause that's entertainment, and will probably spawn other girls into the sport.

SK: Best thing about the Van flat scene?
PC: We have about 6 local riders that actively ride, and we range in age and style. Vancouver is also a popular place for Asians taking ESL to stay for extended periods of time, so we usually end up with a few additional riders for the summer seasons. In general Vancouver is popular for tourist and we're lucky in that perspective because we inherit honorary crew members and new friends.

SK: What is Team Kush?
PC: Hahahah. Team Kush, the Ganji Tribe of the North West. Billy coined the term shortly after I arrived on the scene. The summer earlier Troy moved to town. The three of us were riding at the Indy Track one day, talking about organizing a jam, when Billy blurted it out during a pre-session session. I think Billy was stoked that the Vancouver scene was once again gaining momentum in permanent riders, who love the ganga, and that was it, we were a team. Initially I didn't like it, but then it grew on me. It makes me feel young, and I know there will always be a part of me that rejects professionalism, 9-5, and the rat race. It added that element of rebellion, trifling as it would seem....

SK: Name someone or something that is Trifling...
PC: Flatland is just bikes, no matter which way you look at it. People get too serious about it, cut other riders up for anything and everything, and lay too much pressure on competitions. That’s trifling. Just ride your bike, encourage others, and have fun. One time I read something on a forum about how competition is what drives flatland progression. Give me a break. I got two words for you; Travis Collier. He rides his bike, rides it well and hasn’t entered a contest for years. He is super progressive and probably my favourite pro rider, and a good friend. There are many other pros along the West Coast that do shows, not competitions and stay progressive, Travis is an example of a something I’ve seen firsthand. 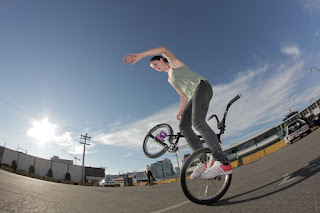